Do NOT photograph my poster!

Please respect my decision and instead photograph this DOI that links to a full fidelity and high resolution PDF which is freely available on FigShare.

Attending and participating in conferences is an important piece in the world of scientific research. Most will tell you stories of serendipitous run-ins and conversations that occurred at meetings that later led to career shaping ideas and projects. There is something magical about putting hundreds of passionate people from a niche field together in a small venue for a weekend that lights sparks and results in lots of great brainstorming.

Inevitably, you'll find yourself at the poster session -- a scientific rite of passage. Condensing down potentially years of really cool science into a medium the size of a movie poster is certainly an art. And it takes production and gusto to stand in front of your poster to explain experimental set-up, results, conclusions, and future work in the span of 5-10 minutes to a complete stranger. Or even more onerous, that big-wig in your field whom you've read all the amazing papers and research coming out of their lab.

And sometimes you nail the performance, which it truly is. The viewer is interested and they want to know more! Being considerate of the typical policies of the conference, which almost always default to secretive, closed-door rule of no photography, they might ask you if they can take a quick pic of your work!

Countless hours of effort go into making the results of your poster clear and presentable. And who knows, the results from this poster could indeed be the key to a super successful and fruitful future career! So, when confronted with the request of taking a quick cell-phone picture of my poster I almost always give them a firm and decisive "NO". I take immense pride in my research and I am not going to have you just walk away with a blurry 4.2 mega-pixel rendition of all of my hard work!

Please respect my decision and instead photograph this DOI that links to a full fidelity and high resolution PDF which is freely available on FigShare. Or, check out my twitter feed where I posted a link containing the full and entire poster the day before the conference even started. There is absolutely no reason why you should walk away from my poster with anything less!

I've heard the arguments for why academic conferences should be a place where science should be discussed in confidence, "I might get scooped!", "What if a competitor steals all my ideas!". It has always been an argument that I never fully understood. You are literally standing in a room full of super smart people, spewing out bits and pieces of information hoping that your hard work and input gets recognized, while at the same time hoping that nobody uses this new information once they leave the room? I find it odd that while you agree to present your most recent research in the form of a talk or a poster, there is this strange condition that nobody is allowed to photograph or tweet about it due to the fear that they may claim the discovery of this new result as their own? For being considered rational and logical people, this fearful and reactionary behavior coming from scientists baffles me.

Here is my rebuttal. Here is why I've committed to making full fidelity PDFs of every major poster and talk of mine available online during, and sometimes before, conferences and meetings that I attend. 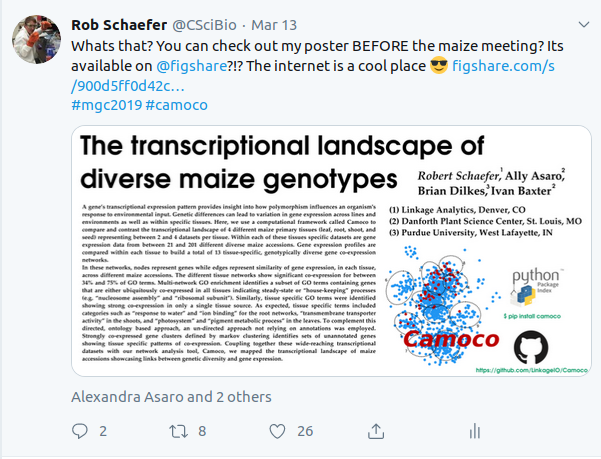 Let's first address the worst timeline. Let's assume you presented a stunning new result and it just so happens that 3 months after the meeting, a competitor lab publishes a similar observation in a super high-impact journal. The results are out of nowhere and so eerily similar to yours that it just couldn't have been due to coincidence (we're talking like, p < 10e-12). Nobody will believe you that you got to it first! You've been "scooped". They didn't even cite you and now your result is effectively worthless (also not true but a conversation for another time). If only you had some sort of time-stamped evidence that definitevely showed that you were there, just 3 months ago, with the golden egg in your basket. Even better, what if you had a string of well documented, publicly available snapshots of your own research that showed a clear and concise path to the result?

Working open gives you just this. And in the nightmare scenario that there are bad-actors involved who "steal" your work and benefit from it, I would hope that as a community we could all agree that credit is due to the party who has been clearly working on this thing all along. I also believe that as a community, its clearly known when parties act in bad faith. I think that the days are numbers where this sort of academic espionage is able to take place. I think that the closed and secretive culture around conference proceedings only enable such behavior.

The second half of my rebuttal relies on the belief that working open works. While the magic of being at an conference is thrilling, meetings are by design an exclusive and narrow affair. Don't sell your hard work short by just sharing it with a small group of people who happen to fly out to a conference location. Making my posters available via figshare and twitter allows for people who are not able to make it to a conference the ability to view and consume the same information. Even before I stand in front of my poster for the first time, figshare indicates dozens (sometimes hundreds!) of views and even several PDF downloads. I've had experiences at massive conferences where I talked face-to-face to just a handful of people at the poster session, while the poster was heavily viewed online.

This is impact. This is reach. Your work is accessible, it's citable, it's documented, and best of all it lets anyone who sees it follow up with you online. Plus, the momentum continues well after the conference closes. While researching this post, I checked to see the status of a poster I uploaded last year and found that, since the conference, my poster has been viewed count has nearly quadrupled!

So next time someone asks if they can snap a quick pic of your work, do them a favor and say "no". Have them snap a pic of that DOI that links to a full version online.

Yet another parallelizing your python* workflow tutorial

We got a Mozilla Science Mini Grant!